Where in the World is Calgary Birder? - Clue #3


I'm heading off on an exciting trip this summer: a family vacation with lots of opportunities to see many new birds, as well as other cool wildlife.  Rather than just telling you where I'm headed, I figured it might be fun to post a few clues in the form of photos of birds that could/should turn up on this trip.

For a third clue, meet this little songbird which is much less famous than the destination where we are most likely to spot it!  Feel free to post your ID's and destination guesses in the comments. 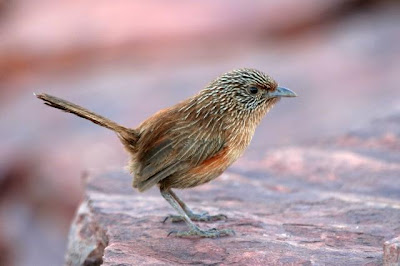 All of the images used in this series of posts are from the Internet Bird Collection, links will be posted to the original image and species pages when the big reveal is made.

Last weekend I joined a small group of intrepid birders in braving the rain and heading out to explore Bowmont Natural Environment Park.  This park is on the north bank of the Bow River, below the community of Varsity in northwest Calgary (click on the location above for a map).  There is some great birding habitat in this area: riparian habitat, small ponds, deciduous woodland, and shrubby ravines.  The area is actually scheduled for redevelopment to reduce the impact of dogs on the river and to reintegrate the old gravel pit into the natural park, among other goals.  You can check out the redevelopment plan and, for the next couple of weeks, provide feedback on the City of Calgary website.

As was to be expected with the intermittent, at times heavy rain, the light was not very good for photography but I did get a few decent shots, as captioned below.  There's also a species list at the bottom of this post which is probably fairly typical for this area at this time of year, although Violet-Green Swallow and Common Yellowthroat were nice treats and we were surprised not to hear any Warbling Vireo.

Magic Moments at the Nest Box

This term I’m teaching a short course to my Jr. High students called “Environmental Stewardship”.  One of the projects we have undertaken is building nest boxes under the guidance of local birder Andrew Stiles.  He uses recycled and recovered wood to construct a simple design that, with precut wood, takes kids about an hour to nail together.  You can find out more about the design and his program on his website.  I also came across this short video of him putting one together and talking about the different types of nest.
We enjoyed a sunny afternoon on the walkway in front of the school putting our nest boxes together and later decorating them.  As many of last year’s boxes had ended up abandoned at the back of the classroom, I wanted to take it one step further this year and actually visit some appropriate habitat to put up the boxes.  With Andrew’s help we picked a spot on the west edge of the city and headed out.
I was a little skeptical about how much success we would have with attracting birds, due to the urban location, and late May timing.  But then something magical happened….
At first just one pair of Tree Swallows appeared in agitated flight overhead.  I thought that we had disturbed a nest somehow but couldn’t see any possible nest site.   Then two more pairs arrived circling and swooping along the fence as we made our way down the line putting up the boxes.  Finally the penny dropped as one pair landed on the box, the female inspecting inside while the male kept watch from the wire.
Can there be any better way to connect with birds than putting up a nest box that you have made and then watching as, seconds later, it is occupied by a mated pair?  Of course teens will be teens and there was a little feigned indifference but I’m certain that those tree swallows connected with some students that afternoon and made them appreciate the natural world just a little bit more.
Hopefully the above sight will greet any students that (carefully, quietly, and briefly!) check on their boxes in a few weeks time.  That photo was taken by “Prairie Birder”, barely out of Junior High herself and with a huge passion for birds.  You can find more information and examples of nest boxes on her website here, here, and here.
Posted by David at 06:00 3 comments: